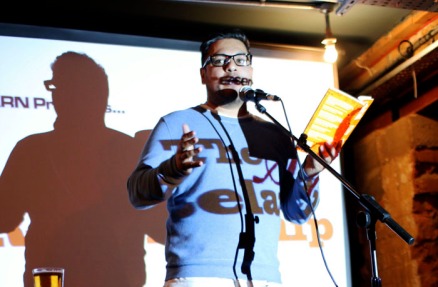 The best darn storytelling outfit around, YARN festival’s latest show on May 1st did not disappoint. The event is called ‘The Special Relationship’, but austerity is certainly not the policy of this particular coalition. Overseen by curator-in-chief Gemma Mitchell, generous portions of poetry, miniature plays, film and prose are expertly woven together throughout the night.


With a high turnout for a Tuesday evening, the Book Club is a near-perfect venue. It’s cosy enough to feel intimate but resolutely retains its Shoreditch credentials; a gigantic hole in the partitioning brick wall casually accommodates a would-be sloucher, who puts his feet up to enjoy the show.

In between the performances, Tom Basden’s sparkling compareship keeps our energy levels high – it is May Day, after all. He intersperses the main acts with micro-stories packed with the kind of irony and metaphysical improbability that some will recognise from his two-man comedy show, Freeze, in November 2011. 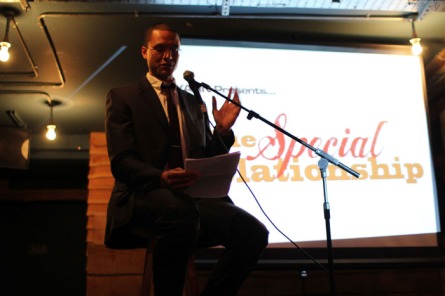 Anyone who has ever attempted to beat-box in their youth (or, more likely, making a series of syncopated ‘tutting’ noises while covering a friend in flying spittle) will squirm in their seats listening to the tales of Nikesh Shukla. The Generation Vexed author recounts how ‘Pretty Cool’, his teenage rap band, struggled to record a demo tape while his mother’s prayer group gathered in the kitchen below. Punctuated by translated Gujarati-English hybrid conversations with his mother, Shukla’s hilarious story wryly conjures up the awkward escapism of hip-hop fans in suburbia.

Another writer with an anarchic streak, Rich Fulcher gives us a taster from his famous book Tiny Acts of Rebellion. These vindictive yet superbly lame suggestions on how to ‘stick it to the man’ in your daily routine include screaming in a crowded train, refusing to sit in your designated seat on a plane, and in one controversial case, giving a baby the middle finger. Take that, society…

With a diverse, unashamedly literary line-up and needle-sharp wit, YARN has the audience in stitches. Don’t miss the next one.

Anya Pearson is half of the duo that runs the brilliant inc. magazine. They are launching their next issue with a huge event at The Book Club on May 30th.