It is rare that we at Annexe HQ get to, or feel the need to, review video games. So rare in fact that this is the first and only one so far. On the whole, video games run on very different rails to a traditional book narrative, though with statistics like ‘for the first time ever, more Americans play video games than go to the movies’ being bandied about, you can see why the two mediums are reaching a fork in the road. As a gamer myself (slightly more than casual, slightly less than avid) I have been acutely aware of the shift in the mainstream from games wherein you solve puzzles, and progress with only a few hints at what you’re even doing there, to games in which the storyline is the prime goal, so you find keys (in whatever shape that may be) and fit them into locks to find out what happens next. A sort of glorified choose-your-own-adventure story. Glorified because it’s only one adventure that you have the illusion of choosing. Of course, this isn’t all games. The on-the-rails nature of gaming is generally only part of mainstream gaming in which a highest common denominator has to be entertained. Consider blockbuster films as an analogy.

There is a thriving indie gaming culture that creates games for a number of reasons, but primarily for fun; because they want to. Without this tether of mass-marketing, a few gems are emerging that really play with the idea of ‘gaming’. One such company is Tale of Tales, an artistic duo based in Belgium who have spent the last ten years using the medium of video games to make electronic art.

My first encounter with Tale of Tales was through their 2005 MORGP, The Endless Forest. Each player is given an avatar that looks like a deer with a human face ripped straight from the uncanny valley, and using that avatar they roam around a forest. It was an experiment in non-verbal communication, as the only way to interact with other players was through a given set of actions. Though I didn’t take to it at the time, it evidently caught the imagination of a large set of players who are still charting and translating a language through virtual-deer-signing.

From that very early project, ToT set out their aesthetic manifesto, and the next few games displayed their thematic element. Taking existing fairytales and reworking the core ideas to create something new. Their next set of games used Sleeping Beauty and Red Riding Hood quite explicitly. Recently however, the motifs taken from past stories have been a little more refined. Taking that extra leap from the starting point, ToT have created games that centre around ideas like death and dreaming. Which brings us to their latest endeavour, Bientôt l’été.

You choose your character; man or woman (both rather modish in all white) and you are dropped onto a beach. No introduction, no direction. You navigate the landscape and find the few key points to interact with. This is the gist of the gameplay. ToT are very direct in saying “This is not a game to be won. Play for the experience… There is no goal. There is no story”. Ah ha! Very clever Tale of Tales! By saying that, I spent the next hour wandering about and inevitably created a story of my own. I couldn’t say if I was winning or not, but I was certainly progressing. 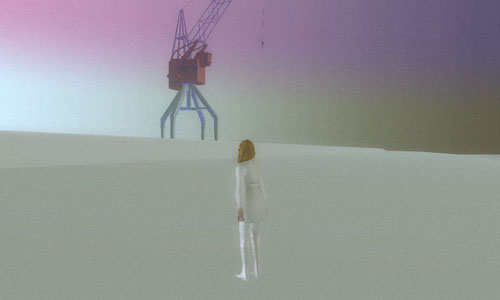 The whole thing feels very dreamlike. The scene is all washed out colours and there is an ethereal soundscape floating in the background. As you walk to the shore, you encounter phrases. Maybe they are memories. Walking away from the shore you see a small house and upon entering it, you are presented with a table upon which are a chess board, wine glasses and a pack of cigarettes. At this point you are no longer meandering through the game alone. The objects on the table serve as the interface to speak with another player (or a simulation if you can’t find someone else). If there is a part of the game that sits higher than the rest it is the chess board scene. While the whole thing is a cleverly considered use of sparse narrative, this is where things really kick into conceptual high gear. By placing a chess piece on  the board, you can recount the phrases you picked up outside. The person sitting opposite you is shimmery and translucent like a ghost or… a memory?! The game starts to tie together and while it still isn’t a definite storyline, it feels solid enough for you to want to progress through. All the dialogue is based on the work of Marguerite Duras, a writer who famously elevated the importance of things that weren’t said over those that were. With this in mind, the chess board conversation works very well as there are gaps where phrases are considered before being played. It can, sadly, be a little nonsensical at times as you can’t always create a full conversation, or even a disjointed one, with the phrases you are given, but on the whole it works.

Upon leaving the house, you find that an object has appeared on the beach, each time something different. By examining it you gain a memory of it in a cut scene and it turns into a chess piece which you pick up. All highly symbolic, but not too frou frou. There are a few other little changes that really push at the feeling that it is all a dream or fantasy, but I won’t ruin them as the surprise is a large part of the appeal. 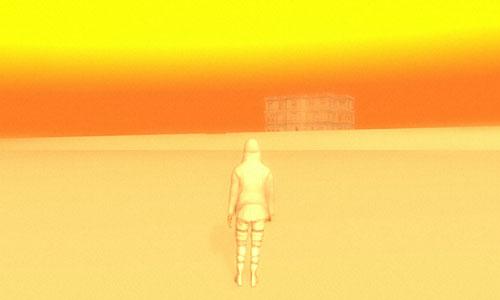 As a team of two, Tale of Tales have made exceptional work, and the credits show that they brought on some extra help for this project which I’m sure only made it better. My only issue however is one that I see often with smaller game companies. Aesthetically, Bientôt l’été isn’t up to scratch with contemporary gaming. The landscape and characters are well thought out, but the execution feels slightly lacking. To put it another way, the look of the game does not in any way make it feel bad to play, but it does make it feel a little dated. For a game that is clearly about being immersed in the world, that is a flaw that is hard to ignore. It isn’t impossible to get past though, and I can happily say I felt swept away by the game. It’s the only game in which, from the comfort of my computer chair, I’ve had a heartfelt romantic tryst, in French no less, and at times genuinely felt it.

Tale of Tales is Auriea Harvey and Michaël Samyn. Bientôt l’été is out now. Have a look at their other games as they are all rather clever in their use of video gaming to tell stories.