Saxophone and Spoken Word Tussle in The Clore Ballroom 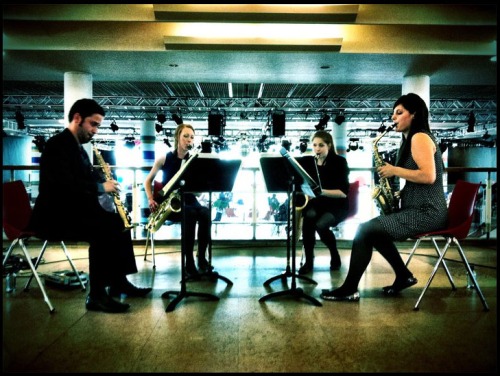 Recently we headed down to the Southbank Centre to catch The Kudo Quartet. The incredibly accomplished ensemble were playing a piece of particular interest to us over at Annexe; a composition for saxophone quartet and spoken word soundtrack by the Dutch ‘avant pop’ composer JacobTV (Jacob Ter Veldhuis 1951). JacobTV specializes in combining monologues with contemporary classical music, using the voice as another instrument. The voices used come from interviews with all manner of individuals, from Chet Baker to prison inmates serving life. The resulting works are really quite powerful and dense with surprising harmony.

After the concert we caught up with Abraham Minnen, Soprano Saxophone player and Kudo primary, about the performance.
Read the full interview after the jump.

Hi Abraham, firstly, how did you all come together as a quartet?
We’re currently studying together at the Royal College of music.

You have a solid grasp of contemporary and modern styles of music. Is that something you look for as a quartet?
I think this [performance] is probably the most traditional we’ll get! Although, it depends what we’re playing, but if we’re playing in a concert that people have come to listen to us we play more contemporary music. The repertoire for the saxophone is quite new so we like to play quite a lot of contemporary music. We have some composers who have composed music for us and we collaborate with them.

I’d like to focus on the penultimate piece you played today…
Ok, I’ll tell you what it’s about. It’s a dutch composer called JacobTV. Because his music could be classed as avant-garde pop music, because it uses a backing track, he’s changed his name to Jacob TV as a stage name. His compositions are almost all about his interviews. He interviews someone and then he uses that interview, he transcribes it and then mixes it as he did here, and adds something to it and then writes it for an instrument. This one is transcriptions of lifetime prisoners and saxophone quartet. The title of the piece is, Take a Wild Guess, boombox and saxaphone quartet. Other ones he’s done are interviewing Billie Holiday, which is for Alto and backing track. There are two more saxophone quartets that I know about, one of which is Pitch Black. It’s an interview of the jazz trumpeter Chet Baker. There are ones of transcriptions of people on Jerry Springer and several ones like that.

What attracted you to this piece?
Well, actually we were asked to play it. I’d played his music before, I played the piece called Billie, which is interviews with Billy Holiday, the jazz singer. I played that and then we were asked to perform this one at an event and we learnt it. It’s a great piece in our repertoire and we look for any opportunity to play it.

Do you look for the cross over from traditional instrumentation into spoken word?
Yes, we’re interested in playing something that’s appealing to both us and the audience and this certainly is. It’s very contemporary, but i guess you could say it’s contemporary mainstream. It’s easy for the listener to hang on to because there’s a strong sense of rhythm. Audience friendly.
But as far a contemporary music goes I think we try to look for something that’s more than just a piece to perform. Maybe something that’s a performance like acting. Something that has movement involved, or electronics.

What do you think are the main challenges in finding good saxophone repertoire? Is there more and more coming out now for saxophone ensembles?
The challenge is that, seeing as the sax is such a relatively recent instrument, the repertoire written for the sax is either late romantic or 20th century, so if we want to play anything earlier it has to be a transcription of something written for, say, flute or violin or whatever. The main problem is that we don’t have that long tradition that other instruments do and most composers are more prone to write for them. But having said that, contemporary composers are more prone to writing for something new because that is what they are looking for and so, to get young composers to write for the saxophone is not hard.

To find out more about JacobTV’s work have a gander at his website.
Also, I recommend his piece Grab It! for electric guitar and boombox being performed here.

There’s not much in the interweb about The Kudo Quartet, but they exist here.